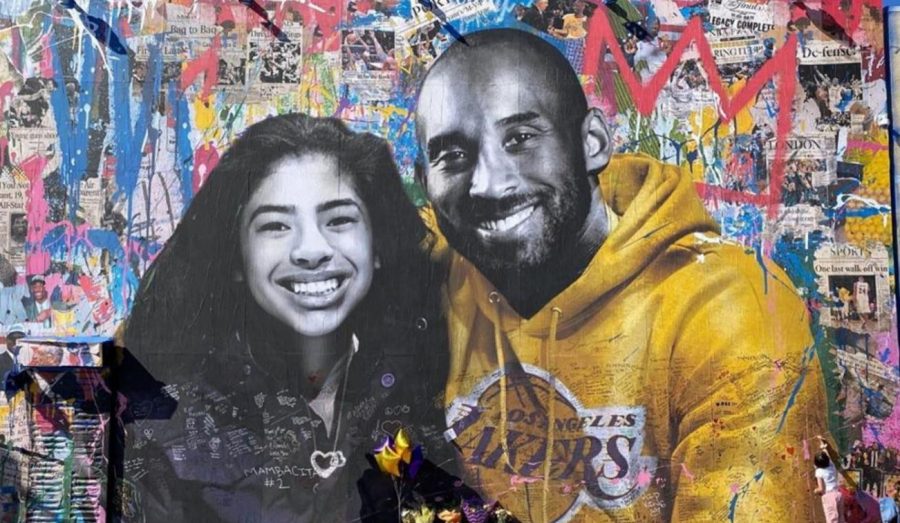 A memorial mural in LA

On February 24, the memorial for retired NBA star Kobe Bryant and his daughter Gianna Bryant occurred.  Over 20,000 people attended to grieve the loss of the star, his family, and the seven other people who died in the helicopter crash.

The memorial started at 10 a.m. and went on until around 12:30 p.m.  The two and a half hours was filled with speeches, songs, and picture slideshows showing off Kobe Bryant and his family.

Beyonce performed one of Bryant’s favorite songs, “Halo” and Alica Keys performed Moonlight Sonata by Beethoven. Bryant had learned to play this song perfectly within a week right before his death.

At the memorial, Jimmy Kimmel was the first speaker.  He stated, “well you picked the wrong guy to start out with. Murals are painted because the artists were inspired not because he was a basketball player. But also, he was an artist.” Even though Bryant was famous for basketball, he had also written books about his career in the NBA and he won an Oscar for the best animated short film, Dear Basketball.

Vanessa Bryant, Kobe Bryant’s wife, spoke about her husband, “I met Kobe when I was 17 and ½ years old. He was my best friend, my confidant, and everything else. Take care of Gigi. I got Natalia, Capri, and Bianca.”

Vanessa Bryant had these heartfelt words to say about her daughter Gianna: “I’ll never get to tell my Gigi how beautiful she looks on her wedding day. I’ll never get to see her have her father-daughter dance or have children of her own. She would have been a great mom. And that she always kissed me good night and good morning. She had left for school and I texted her no kiss and she replied I did but I didn’t want to wake you.”

Sabrina Ionescu, a basketball player for Oregon University and one of Gianna’s heroes attended the service.  She stated, “I had met Kobe when our coach said there was a surprise. I worked with Kobe twice in the summer. Gianna had a desire to be great.”

Many sports stars were in attendance.  Those who came to pay their respects included Anthony Davis, Kareem Abdul-Jabbar, Magic Johnson and Michael Jordan who also spoke at the service. He said “Kobe can get to you.”

The Black Mamba and Mambacita’s legacy will live on forever as we remember Kobe Bryant and Gianna Bryant. Daniel Contreras, a freshman here at Sultana, had this to say about Bryant’s death, “I’m sad because he was a very good basketball player and entrepreneur. Kobe was very well respected and talented.”

Gianna and Kobe Bryant had a powerful impact on the world when they were alive. They will be remembered as the amazing people that they were.