The Spy In Your Pocket: Cyber Security Threat 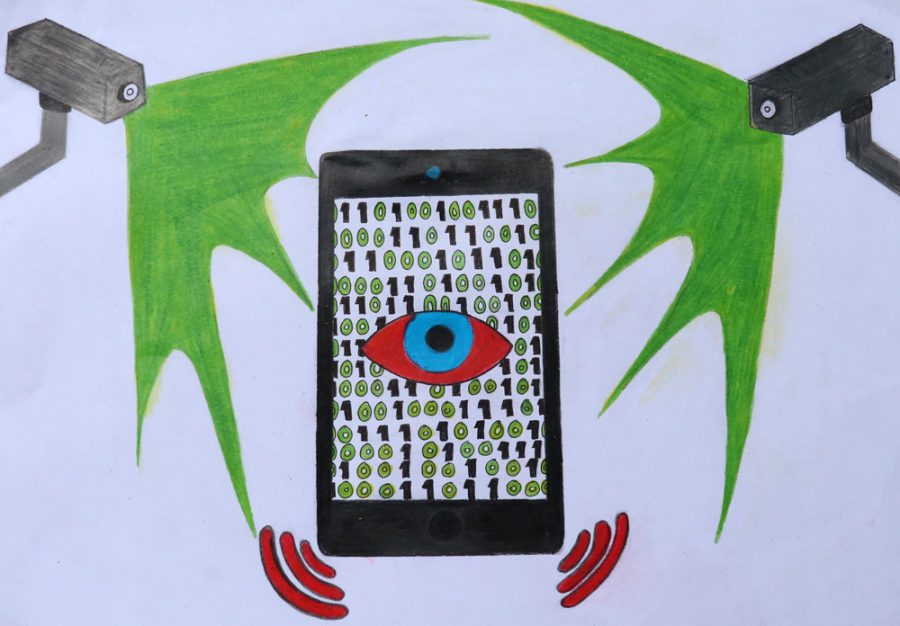 Buzz, like, share, tap, tweet, snap, send, upload. A study by ABC shows that on average teens use their cell phones for seven hours and twenty minutes everyday. Since teens spend so much time on their cell phones, their cyber security is of the utmost importance. Unfortunately, it might be in great jeopardy.

Many do not know this, but our information is being used and sold, without much say from us, by many big tech companies such as Google and Facebook.

These companies take your information and create targeted ads. Targeted ads are considered especially malicious in the marketing industry. They work by sending internet users ads based on sites they have viewed, which are shown to be more effective and harder to resist.

Imagine looking at a fancy computer on a site and then constantly being bombarded with ads for that computer or a similar type.  Google might sell the amount of time you spend browsing certain websites to various companies.

But Google isn’t the only company that tracks your online activity. Companies like Facebook also get their fair share of stalking. Cyber stalking pays off.  These companies get more than half of their total revenue from the use of targeted ads. Because of the impact on their profits, these big tech companies are continuously exploiting their users as often as they can in order to improve their bottom line.

Targeted ads have become a growing problem and many sites such as YouTube have tried to protect their younger users, whom they consider to be very vulnerable to this form of advertising. Youtube formally announced that in 2020 creators must label any videos of theirs that may appeal to children. If creators mark a video as directed at kids, data collection will be blocked for all viewers, which results in lower ad revenue.  Unfortunately, videos correctly designated will lose comments and end screens. This decision has created much backlash but is said to be a necessary protective measure which YouTube will not debate.

Junior Nathaniel Paps says, “It is really creepy when I look up something once and then get a million ads for similar items popping up on my screen. I feel like I have someone looking over my shoulder while I browse the web.”

However, these problems seem trivial compared to some of the more intrusive and mischievous activities that our government has been participating in.

Having little to no privacy from companies is one thing but having  phone calls, text messages, and other sensitive information collected from the government and preyed upon creates a new definition of cell phone spying.

Lots of companies say that they like to stay away from crossing the creepy line. They’ll get close to it but never cross the line. The creepy line is an imaginary line that companies came up with in order to monitor their own behavior and make sure that they are not overstepping boundaries while spying. The government, however, has no shame in crossing this line at all. More about this can be learned through former NSA member, Edward Snowden.

On May 20, 2013 Snowden flew to Hong Kong where he leaked top secret government documents exposing the National Security Agency. In these documents, information about how the government system was abusing the patriot act and other so called protective legislation.

The patriot act is supposed to protect Americans from both foreign and domestic terrorist attacks. The act enables the government to take the information they find in people’s phone calls and texts in order to weed out the bad guys and keep America safe. Despite the seemingly good intentions of the government, many people, including Snowden, thought that the government had severely overstepped a boundary.

People everywhere are seemingly becoming more aware of this situation. Comments about the government watching everything we do and people praying upon our personal information can be found floating around in conversations from time to time. Even our President Donald Trump has claimed to have been spied on.

Junior Derek Campos is no fan of the government lurking through his information,” The government clearly has way too much power if they can do this. It goes against what we stand for as a country and I am sick of it.”

With threats coming from both the commercial sector as well as our government, many people have been looking for ways to protect their digital safety. As of right now, we do not have any possible solutions presented to try and combat this problem. Only time will tell if we regain our digital privacy or lose this vestige of freedom for good.