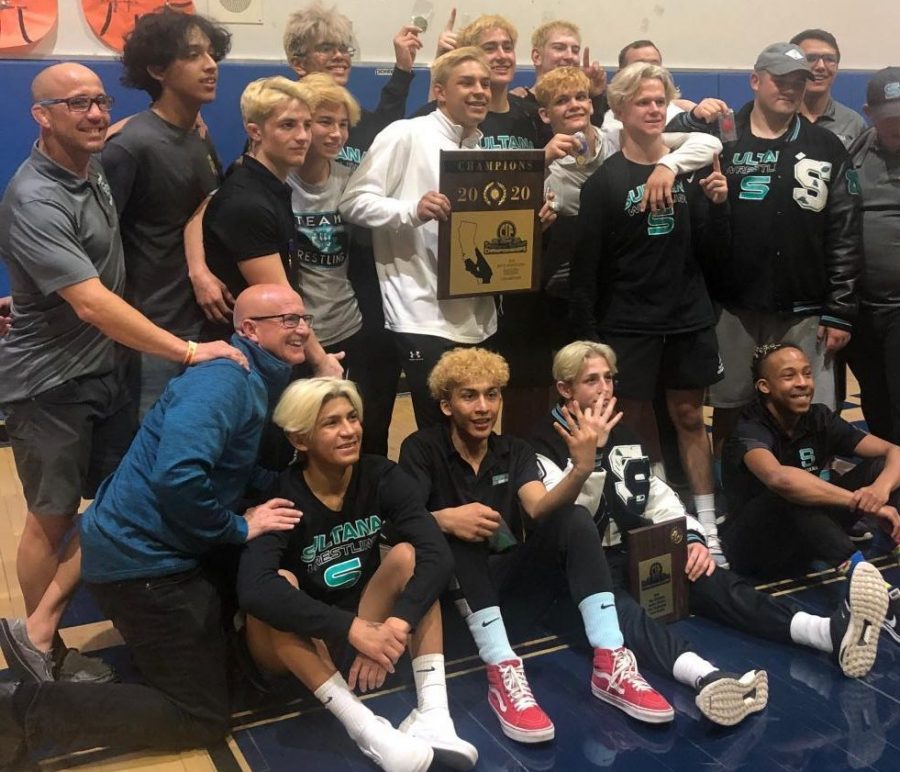 For the first time in Sultana history, everyone on the Sultana line up for wrestling made it to CIF on day two. The team shattered the already high expectations when all of the Sultana wrestlers placed in the top eight. Since Sultana is ranked 22nd in California for the best wrestling programs, it comes as no surprise that the Sultans had another amazing year.

The boys had a tough season raking in Mojave River League and CIF championship titles. The Sultans won all their dual meets by a landslide and had eight League Champions. All fourteen wrestlers progressed to CIF and although all fourteen placed in the top eight, only the top five from any weight class can move onto the masters meet.

Of the fourteen placers at CIF, only nine placed in the top five and progressed. Four individuals made the cut for state, three seniors and one junior; Ryan Spangler, Loui Cisneros, Brandon Bollinger, and Ethan Aguiniga.

Ranked 4th in state, Brandon Bollinger stated, “season went pretty good, My whole family wrestled so I was basically born into it. I’m gonna miss how easy some of my opponents are because once I go to college it’s gonna be more of a challenge.” After high school, Bollinger wants to go to a four-year college and continue his passion of wrestling.

Loui Cisneros states, “this season was amazing! I won a couple of tournaments and I believe my teammates did great this year and that’s all I could really ask for. I had two older brothers who wrestled at Sultana, so they introduced me to the sport ten years ago. The thing I’m gonna miss most about high school wrestling is going to tournaments and having fun with my teammates.” Cisneros was ranked twelfth in state and plans on going to college after high school and continuing his years of wrestling.

Ranked at eleventh in the state, Ethan Aguiniga says, “this season went by quickly, but overall it was an amazing experience. I had really put myself out there and accomplished things I thought I wouldn’t have. I wanted to do wrestling because my dad and older brother had done it and I’ve been wrestling for eight years. I’m mostly gonna miss the fun trips with the boys and after high school, I plan on wrestling in college.”

The future looks bright for the Sultans remaining especially if the team progresses at the rate which it has been growing.  As this is the team’s second year in a row in which they pulled a CIF championship, Sultana can look forward to moving up in rankings of high school wrestling teams in the years to come.