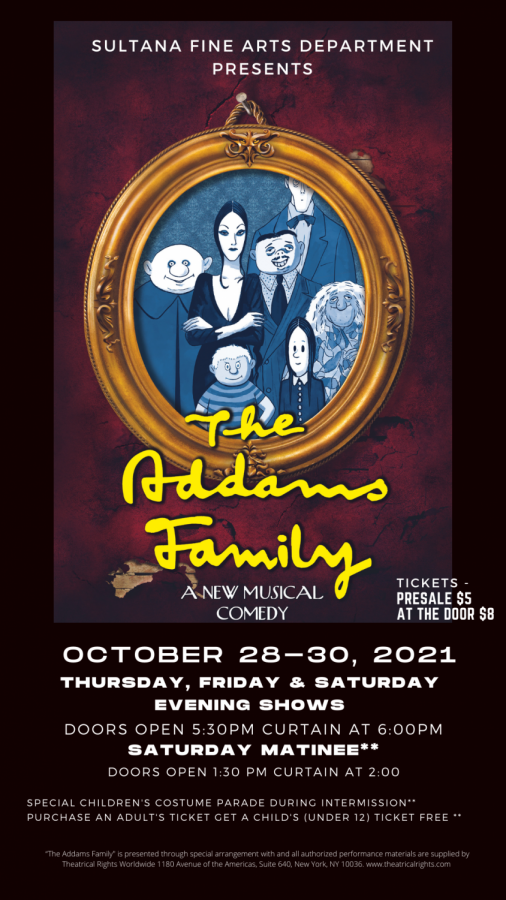 Sultana Highschool is putting on a play about The Addams Family, but it is not the Addams Family we all know from the popular films. This musical is based on Charles Addams’ characters from the comics. It includes the struggles of the Addams’ family, Wednesday growing up and falling in love, and singing.

The Drama club will be performing on the 28th through the 30th of October. The cast is excited for the upcoming show and they’re putting a lot of work into it. Mrs. Kirk, Sultana’s beloved drama teacher, says, “The kids have come a long way, they really are working hard and we will be ready for the audience.”

Sophomore Alexandra Urieta reflects on her participation so far: “I’m feeling so excited to perform, it’s nice to be a part of something like this.” Alex also says, “I believe the audience is really going to enjoy it. There are so many funny bits and improv that the cast are doing and it makes me laugh all the time!”

So if you’re interested in attending this play, the tickets are now available at the low price of $5. However, tickets purchased at the door will be $8 so get them early from a cast member.

As for times, the doors to the auditorium open at 5:30pm and the curtains open at 6pm. Mrs. Kirk encourages people to attend saying, ”live theater has been shut down for 18 months, so being in theater will be a great experience.”

If you are free after school or available during the weekend come see our drama club’s performance and get your tickets soon. They’ll be awaiting your arrival.